Uber Australia Shows Businesses What Not To Do During A Crisis

Tensions are running high in Sydney as an unknown man has taken hostages inside a Lindt Cafe on Martin Place in the Central Business District. Prime Minister Tony Abbott as well as a handful of other leading officials have commented on the situation, where details are scarce but confidence in the NSW police is high.

In the face of such a crisis, people look towards each other, businesses and the government for support and understanding during the difficult time. That’s why many Australians—and the world—were shocked to see Uber Australia had bumped minimum payment prices up to a whopping $100 in the Sydney area. 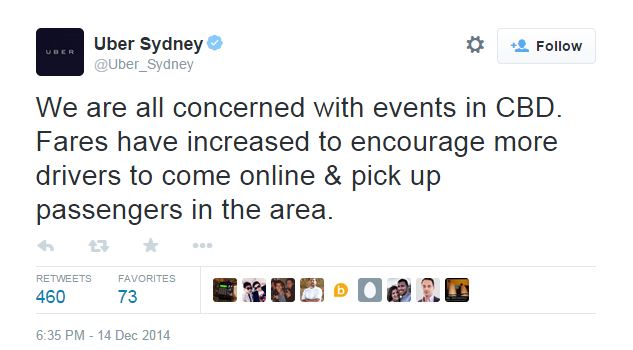 The reason for the price hike makes sense according to Uber’s business strategy, if that is all that is taken into consideration. The base price changes with the ebb and flow of demand, and since Uber drivers keep their own schedule, a higher base price would encourage more drivers to get on the road. With many businesses and streets around Martin Place evacuated, hundreds of thousands of people were looking for a way out of the city. In theory, this opens up several more cars to get people out of the evacuation points

But in this crisis situation, where people are being told to evacuate a large portion of one of the busiest—if not the busiest—city in Australia, the plan backfired. Uber Australia was immediately attacked on Twitter, accused of surge pricing and insensitivity to the events at hand. And for a company that is currently dealing with legal woes in nearly every country in which it operates, it was far from good press.

Uber quickly changed its tune, and is currently offering free rides in the CBD today. 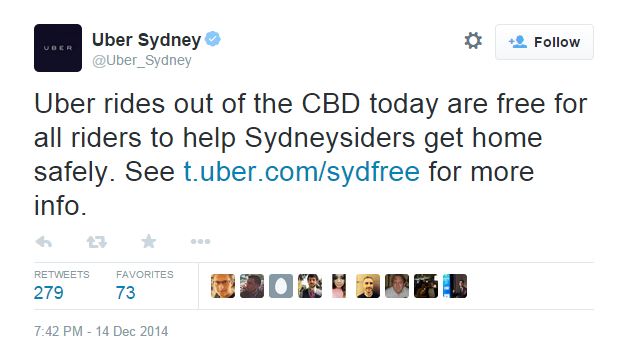 In order to remain relevant during situations like this, businesses get involved on social media to share their support and to potentially offer services if they have something to offer. Share your support, help your community, and do what you can, but remember to do so in a sensitive nature in times like these.

Our thoughts are with the innocent people involved and their families, as well as police and crisis responders. We hope this ends peacefully.